The golden-orange Imperial Topaz is the most highly prized variety of November’s birthstone. 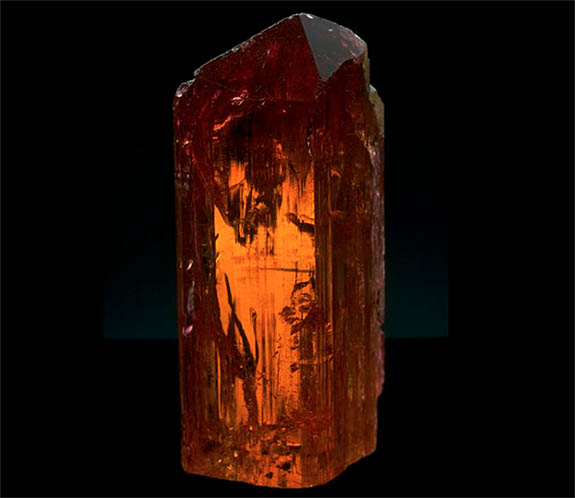 Originally mined exclusively in Russia’s Ural Mountains during the 19th century, the intense orange crystals were so valuable that they earned the designation Imperial Topaz to honor the Russian czar. What’s more, only royals were allowed to own it.

Flash forward to today, when the finest Imperial Topaz is sourced in Brazil. One of that country’s most heralded crystals — an 875-carat head-turner from Minas Gerais — is now a permanent resident of the Smithsonian’s National Gem Collection.

According to the Smithsonian, topaz — especially the yellow-to-orange varieties — has been misunderstood and misidentified for 2,000 years. Before 1950, most “gem experts” shared the misconception that all yellow gems were topaz and that all topaz was yellow. Citrine (November’s alternate birthstone) and even smoky quartz were often mistaken for topaz.

While the prized Imperial Topaz comes in a range of colors from brownish-yellow to orange-yellow and even vibrant red, other varieties of topaz are available in blue, green, pink and purple.

Interestingly, topaz gets its name from Topazios, the ancient Greek name for a tiny island in the Red Sea. The island is now known as Zabargad Island, or St. John’s Island, and is controlled by Egypt. It is very likely that the “topaz” mined there in ancient times was actually a yellow-green variety of peridot.

Brazil is the largest producer of quality topaz, but the stone is also mined in Pakistan, India, Sri Lanka, Russia, Australia, Nigeria, Germany, Mexico and the U.S (specifically California, Utah and New Hampshire). Topaz rates an 8 on the Mohs scale, making it a durable and wearable gem.