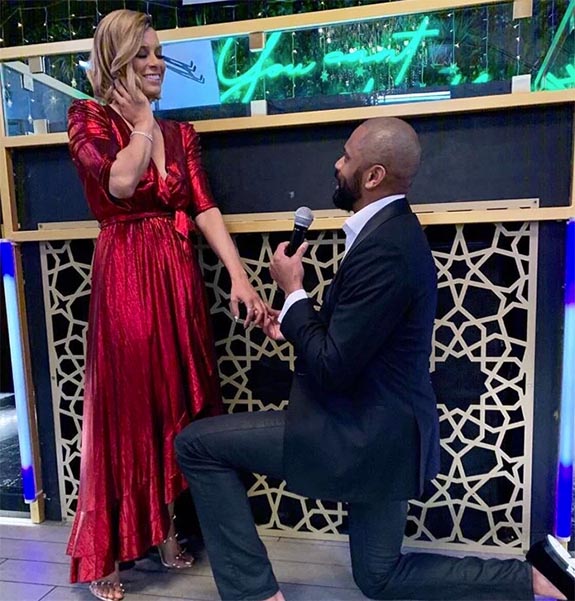 “An untraditional relationship calls for a non-traditional ring!” Robyn exclaimed in an Instagram post seen Monday by her 316,000 followers.

She went on to describe how she told “a little birdie” that if Juan was to ever propose to her again, she would prefer the pink stone instead of a traditional diamond.

The second proposal took place this past Friday at the holiday wrap party for Season 5 of their Bravo reality show.

“Juan gave the sweetest speech and set the whole room into an uproar when he got down on one knee!” Robyn told Bravo.com. “It was truly a special night and is definitely much sweeter the second time around. Oh, and he knows me well and got my ring just right!”

On Instagram, Robyn explained how morganite symbolizes her relationship with Juan.

“I fell in love with the Pink Morganite stone because I wanted something with significance and meaning,” she wrote. “Morganite represents unconditional love — something that our relationship exhibits and has relied upon. My beautiful ring, commissioned by Juan and custom made by @nicolerosejewelry, is an emerald cut, double diamond halo with pink morganite center.”

The 18-karat white gold ring features a 5-carat morganite with a double halo of diamonds weighing a total of 1.2 carats.

The couple’s relationship had been somewhat complicated for the past seven years.

The high school sweethearts were engaged for the first time in October 2005. Then a star on the Washington Wizards, Juan popped the question on Miami Beach by spelling out in the sand, “RB – Will you marry me?”

Robyn, 40, and Juan, 41, had two children together, but divorced in 2012. In an odd arrangement, the couple continued to live in the same house for the sake of maintaining the family unit. Over time, they grew even closer together and decided to give marriage another go.

Robyn thanked her fans and friends for their support.

“Sweeter the second time around!” she wrote. “Thank you to everyone who loved, supported, rooted and prayed for Juan and I. We truly appreciate all of the love and congratulatory wishes as we embark on #DixonsPartDeux.” She punctuated the post with a red heart emoji.

Morganite as an engagement stone has gotten more attention recently. In The Knot’s 2019 Jewelry and Engagement Study, morganite was mentioned as a favorite alternative stone.

While 83% of those surveyed said they preferred a traditional diamond center stone, 10% chose “other precious stones.” Of that group, morganite accounted for 12%, just behind sapphire at 19%.

Morganite is a member of the beryl family of gemstones, which includes emerald and aquamarine. Once known simply as pink beryl, the gemstone got its current name in 1911 when the famous New York gemologist G. F. Kunz recommended that the pretty pink stone be named for banker and mineral collector John Pierpont Morgan. The New York Academy of Sciences agreed and the pink variety of beryl was officially designated as “morganite.”